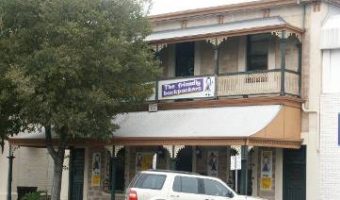 Two-storey former shop and residence built to the Franklin Street alignment. Front elevation is of sandstone with rendered quoins and window and door surrounds: visible side walls are of random bluestone. Roof is hipped and of corrugated galvanised iron; there are paired brackets beneath the eaves. Photographs of 1992 show ... Continue Reading »

This block of houses, in which the austerity of the design is relieved by the cast-iron window balconettes, was built in 1861 for James Dimsdale. They are now used as legal offices

This building started its life in 1848 as the Wesleyan School.  Morgan and Gilbert observed in 1969, 'It is a strange composition possibly copied from other works.' It is not heritage listed although it is of historical interest.

This was built in 1856 as Sir John Franklin Inn.  The verandah and balcony appear to have been added about twenty-five years later. It continues to operate as a hotel more than 150 years later, making it one of the oldest in South Australia.