In February 1922, tenders were called for alterations and additions to be carried out to the hotel. F Kenneth Milne was the architect in charge of the work.  Additional extensions were made in 1935 and 1939.  The hotel remained in use until 1966. In May 1977, the Council gave approval for the installation of shop fittings, a new shop front, stairs and alterations to the ground floor and basement levels. Shop front alterations have also occurred in 1985 and 1987.

Today it still operates as shops.

Hotels formed an essential part of the social and commercial life of Rundle Street/Mall, and the former Oriental Hotel is the most prominent of them and forms a major corner landmark. Designed by prominent Adelaide architectural firm Woods Bagot, Jory and Laybourne Smith, and constructed by Emmett and Sons, it is also an example of the use of reinforced concrete which gained popularity in the early 1920s resulting in the modification of the Building Act in July 1924 to incorporate provisions for the new technology. It illustrates several key themes in the city’s history: 2.5 City Dwellers: City, state and business leaders; 3.1.1 Early Development Patterns; 3.5.1 A City of Pubs; 3.7 Working Men and Women; 4.3 Development of the Building Industry, Architecture and Construction; 4.4.2 Other Forms of Accommodation; 6.2.3 Hotels, Bars and Wineshops. 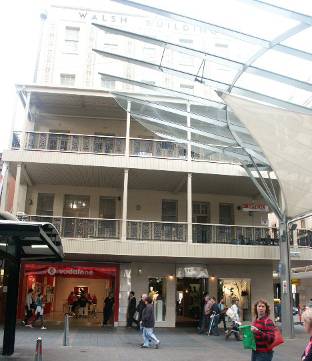