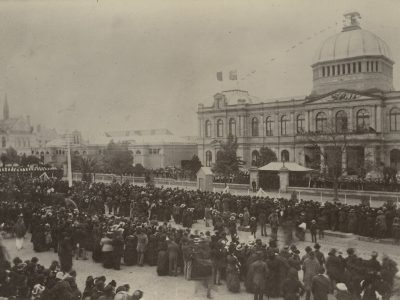 We’ve all walked past it, watched a busker strum beside it or collapsed at its base from shopping-induced exhaustion. But you might not know that the Rundle Mall fountain is actually one of the last surviving links to one of the biggest parties Adelaide has ever seen.

The year is 1887, and around the British Empire tributes are being mounted to Queen Victoria’s Golden Jubilee. South Australia is no different, and with the added significance of the colony’s 50th anniversary of European settlement, a proposal emerges to create a grand new structure to host Adelaide’s own celebrations.

The ambitious scheme for an exhibition building drew inspiration from London’s Great Exhibition of 1851, and the wave of extravagant World’s Fairs it launched, celebrating technical, industrial and cultural achievement around the world. Similar exhibitions were held in New York, Paris, Vienna, Melbourne and Sydney, many with their own lavishly constructed exhibition buildings. 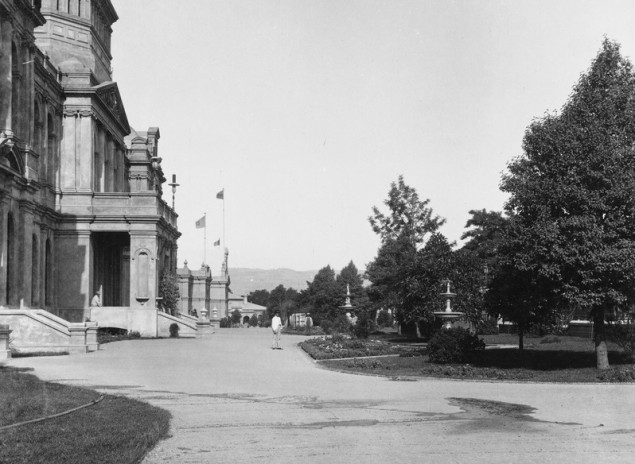 The fountain to the right will be a familiar sight to anyone who has visited Rundle Mall, photograph by S. Solomon courtesy of the State Library of South Australia B 10212/2

A costly and controversial plan, it took several years and a change of government before the building was finally completed (a special rail line from Adelaide Railway Station was laid to aid construction), with celebrations opening on June 21 1887. With ballrooms, theatres and more than 2200 displays from around the world, the exhibition attracted almost 790 000 visitors in the six months it was open. Not bad at all given Adelaide’s population at the time was only 309,820.

But, like top hats and opium dens, the Exhibition Building was another once-prominent vestige of the Victorian whose popularity was on the wane in the years following the Great War. The Royal Adelaide Agricultural Show relocated to a larger site in Wayville in 1925, essentially sealing its fate. The land was subsequently handed over to the University of Adelaide who in 1962 demolished the structure to erect the somewhat less jubilant Napier and Ligertwood building

Despite the exhibition centre and the period it represents have passed into memory, it lives on in a handful of relics scattered about Adelaide. The largest is the striking set of stairs descending down the University hillside behind the Napier office block, now a somewhat strange architectural anachronism surrounded by the many modern University buildings that have sprung up around it. Now the very buildings that replaced it are facing potential demolition, in favour of a “ceremonial and conference facilities combining with a new arts precinct showcasing music, creative arts, and offering lounge space for community and industry engagement”. Progress, it seems, is not without a sense of irony. 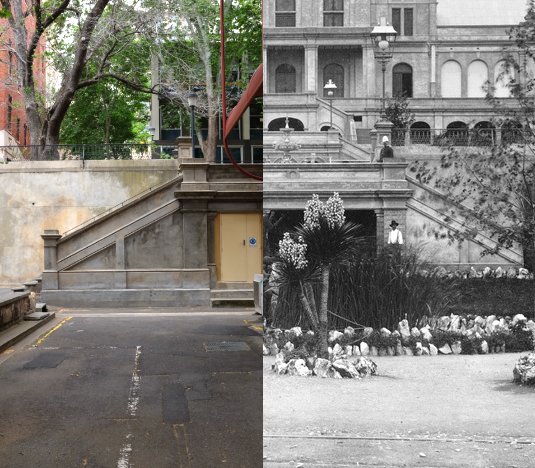 Jubilee Exhibition Building stairs 2016 and 1887, photograph by S. Solomon courtesy of the State Library of South Australia B 10212 3

But perhaps the best-known survivor is the fountain that once sat outside the Exhibition Building’s entrance. In its prime dwarfed by the structure itself, in later years it has found a new place in the popular psyche of South Australians, relocated to the newly closed-off Rundle Street in 1976 where it was famously filled with Champagne upon the opening of the new mall by Premier Don Dunstan. Despite undergoing frequent updates to the fountain’s base, and occasionally controversial changes to its positioning, it remains an unassuming link to that giant, elaborate knees-up at the height of Adelaide’s Victorian-era.

One thought on “Remembering the Jubilee Exhibition Building”