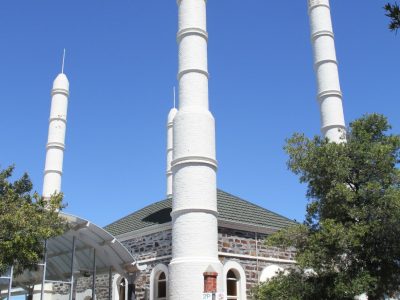 Built in 1889-90, the only mosque within Adelaide’s square mile was built by the then-small Afghan community of South Australia.

The Adelaide Mosque is historically significant as one of the few relics of Afghan immigration to South Australia in the nineteenth century. Camels were first imported in significant numbers in the 1860s and Afghan camel drivers played an important role in the development of outback South Australia. This community opened up much of the arid lands and kept them open by transporting necessary stores and mail to the station families. Camel trains and their drivers are no longer a part of the outback.

Today the mosque remains an important focal point for the community and a key landmark in Adelaide’s south-west corner. Although tucked away on Little Gilbert Street, the four minarets added in 1903 are visible from afar, testament to the many different faiths that have found a home in the City of Churches.