Faith in the City 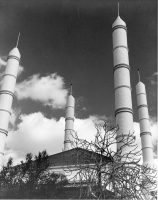 Perhaps some of the most celebrated and significant heritage buildings of the city are those dedicated to worship and faith. Adelaide’s well-known reputation as the ‘city of churches’ is evidenced by the numerous and varied religious structures found throughout the city.

The sites included in this tour are also examples of some of the earliest buildings erected in the city, including Stow Memorial Church built in 1838, the Archbishop’s House built in 1845, and St Francis Xavier’s Catholic Cathedral built in the 1850s. The tour also includes the city’s only Mosque built by the South Australian Afghan community in 1889-1890.

Whilst some of the buildings included in this tour are open to the general public, it is important to be mindful of services being held. Some are also operating as private residences or are not open to public viewing.