This is a surviving portion of a larger building. It is of two storeys. The ground floor shopfront has been altered, but the remainder of the northern elevation appears original. The walling is of masonry that has been painted; quoins and door surrounds are rendered. There is a balustraded parapet that conceals the roof. There is a ground floor verandah and first floor balcony and verandah; this features cast iron supports, brackets and balustrading. The essential scale and form of the building remains evident: only superficial restoration is required to return it to an original appearance if this was desired.

The first building on this site was established by 1847.  It was the site of an auction mart until 1889.  By 1892 a row of seven story shops had been completed by the architects  English and Soward including this site.

A 1936 photograph shows the original form of the terrace and the individual nature of the verandahs to the separate section of the terrace. Another photograph showing 103 Hindley Street from 1959 show how it had been altered. The same photograph offers a partial view of the adjoining shop in its unaltered state (since covered up) which shows the original design to have an attractive balcony on the top floor of three of the shops. Each balcony had a double arch front supported by a double-column central support and single-column support on either ends. The terrace was surmounted by a balustraded parapet.

The building is of heritage value because it retains original fabric and good quality external detailing, for the manner in which it reflects the changed commercial nature of Hindley Street and the scale and form of late Victorian buildings that once predominated in this area, and because it once formed part of a larger group. It illustrates several key themes in the city’s history: 2.6 City Dwellers: Small business owners; 3.1 Economic Cycles; 3.5.2 Retail and Wholesale Industry; 4.3 Development of the Building Industry, Architecture and Construction; 4.5.2 Victorian Commercial (1870s to 1890s); 4.7 Heritage and Building Conservation. 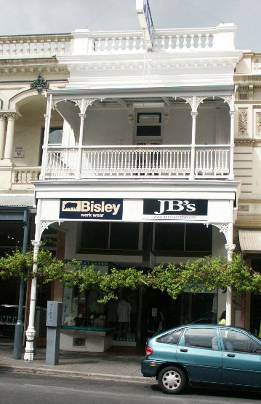